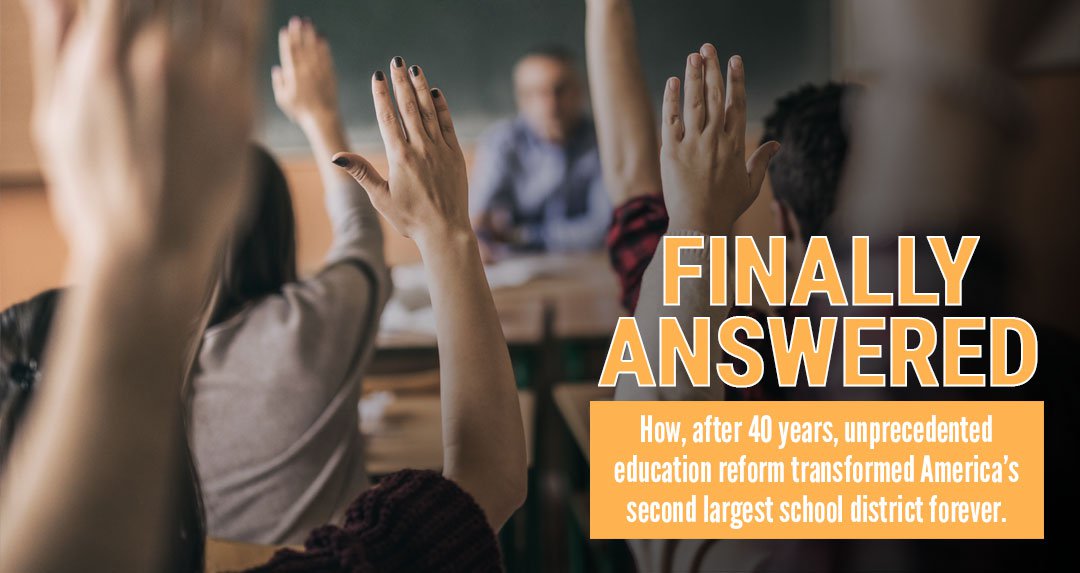 EDITOR’S NOTE: You can read Part 1 of the series at The Walkout — How a Student Movement in 1968 Changed Schools Forever.

The fight for equality takes many forms. But at its most fundamental level, there’s often a central, key point: equal access to opportunity. And in few places has this disparity in opportunity been more glaring than the educational system.

The Los Angeles student walkouts of 1968 were a crucial flashpoint in the movement to achieve equality for Chicano students in the L.A. Unified School District. A movement that would affect students of all backgrounds and heritages. But social change is seldom quick. It would take more than 40 years for district policies to officially grant these and other minority students the right to college-readiness programs.

This is the story of how a grassroots movement forced a fundamental change in educational equality in Los Angeles.

And it’s a story as fascinating as it is frustrating.

Following the student walkouts of 1968, change was painfully slow. Media coverage had been minimal to the point of being almost nonexistent, so the issue of institutionalized bias in the school system soon faded from the broader public memory. But for those on the front lines, the seeds had been planted. And those seeds steadily grew.

Throughout the 1970s and ‘80s, Los Angeles schools began to see more Mexican-American educators, administrators, and even superintendents. But the core issues remained unresolved.

Luis Garza, a contributor for La Raza magazine, who documented some of the demonstrations during the 1968 Walkouts, sums up the social climate at the time.

"When you look at the makeup of the board of education and city government, you realize that there is no representation from your community,” said Garza. “It’s what goes on to this day.”

“You’re trying to engage in a dialogue and instead you’re getting beat up by clubs and you’re getting shut down at the board of education. You have to rally the forces and march and march until you get heard.” 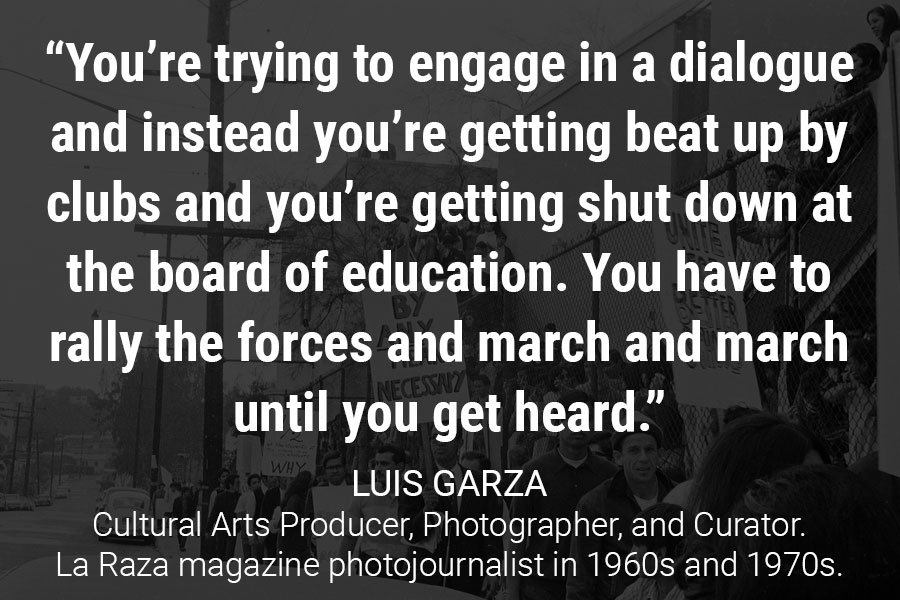 Almost as part of an unspoken policy, Latino and African American students throughout the Los Angeles Unified School District were “tracked” into low-ability, remedial classes. And the results were devastating. Failure to teach high-level skills essentially disqualified these students from going on to college. It also led to inordinately high dropout rates.
Katherine Trejo, leader of United Way of Greater Los Angeles’ Young Civic Leaders Program (YCLP), experienced the negative profiling firsthand. “A lot of the kids at that time were being pushed to do just vocational work,” she said. “Being plumbers, carpenters, secretaries...not jobs that required them to go off and get a college education.”

“I remember I had a math teacher who said something incredible,” Trejo recalled. “I don’t remember what caused it, but she was upset. And she told our classroom that none of us were ever going to amount to anything besides selling oranges on the exit of the freeway.

“That just stuck with me forever.” 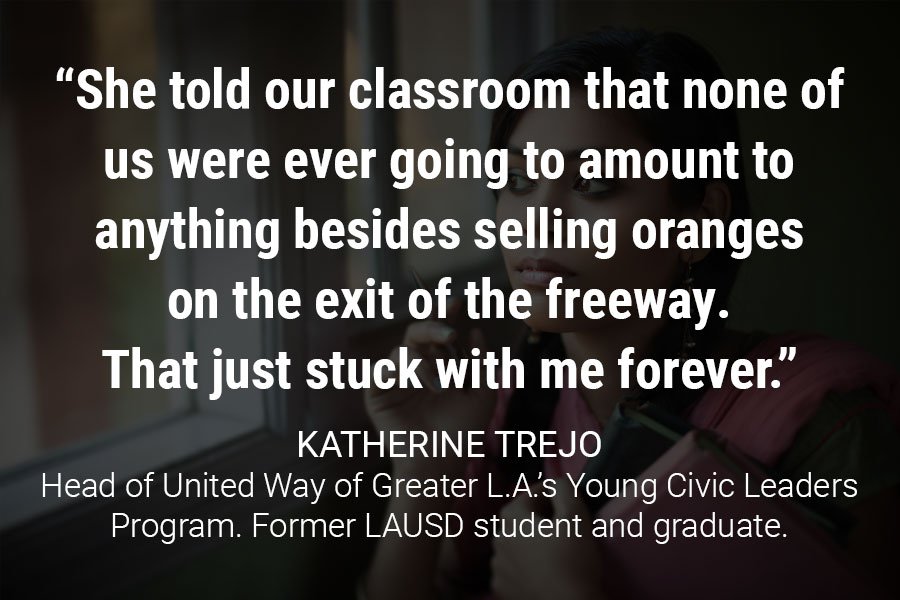 A–G COURSES OFFER A CHANCE TO LEVEL THE FIELD

There was a desperate need for a more uniform approach – for college preparatory courses to be available to all students, regardless of background. And starting in the early 1990s, a number of community organizations – including the Community Coalition, InnerCity Struggle, Los Angeles Annenberg Metropolitan Project, and Alliance for a Better Community – began pressuring for change in the educational system. But their efforts were limited to isolated communities, and system-wide impacts were minimal.

However, a broader movement began forming in 2003 in response to a report issued by United Way of Greater Los Angeles entitled “Latino Scorecard 2003: Grading the American Dream” (see the original report summary here). Los Angeles educational systems received a “D” when it came to addressing the needs of the city’s largest population. This report, and the actionable framework of recommendations it suggested, prompted a meeting of nearly 40 representatives of community-based organizations, research institutions, and nonprofits in June of 2004. The result of this meeting was an agreement that the best path toward leveling the playing field was to expand the A–G curriculum to all students.

"A–G” refers to a series of college-preparatory courses California high school students must complete to be eligible for admission to either a California State University (CSU) or University of California (UC) campus. And at that point in time, not only were they not available to all students, but many students and parents were unaware of their existence or importance, according to Sara Mooney, Education Program Officer for United Way of Greater Los Angeles.

“It wouldn’t be uncommon for someone giving the valedictorian speech in her high school to be unable to apply for college, simply because she either hadn’t taken the right courses or learned about them too late,” said Mooney. 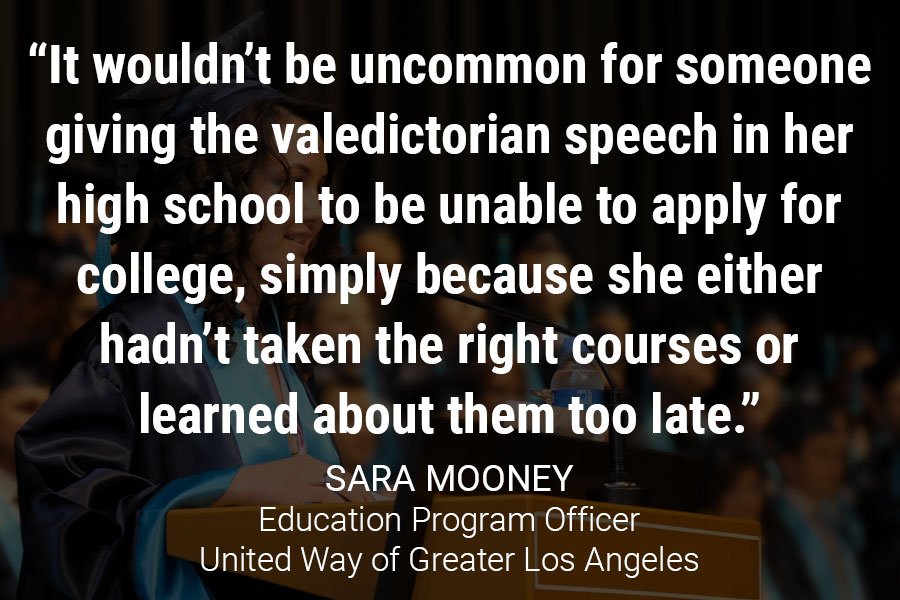 Clearly, system-wide change was needed. Over the next year, the Communities for Education Equity (CEE) was formed, and the campaign for unilateral college preparatory courses began in earnest.

It was an arduous task. The CEE began by meeting with LAUSD leadership, teachers, universities, community leaders, and businesses to learn where each stood on the A–G issue. Support was not unanimous.

Some worried vocational education would be squeezed out of the system. Others cited the already high dropout rates, and maintained that more rigorous courses would only worsen the problem. But LAUSD Board of Education President José Huizar (who now represents District 14 as a Los Angeles City Councilmember), provided an early, strong voice of support for adopting the A–G curriculum as a graduation requirement.

While working to persuade the other LAUSD board members to their side, the CEE was also busy leveraging their community connections to gain support. Any organization interested in putting an end to educational inequality was rallied – youth programs, parent groups, churches, and other community organizations.

This outpouring of community support worked hand-in-hand with hard data to help gain support in the LAUSD. Through surveys, research, and interviews with experts from the San Jose Unified School District (where a similar program had already been adopted, to great success), the CEE built its case.

And the tide began to turn.

Also helping the cause was a demonstrable uptick in media coverage in comparison to the 1968 Walkouts. Consistent talking points shared the story of how the status quo was underserving not only the students, but the community. A–G courses were presented as the obvious answer to address this educational inequity, placing the burden on the LAUSD to justify policies that gave students no voice in their own education and future. Press events helped heighten awareness, and both politicians and community leaders rallied to the cause.

But the primary voices were those of the community members themselves – the students and teachers most affected by the current system. They understood the importance of serving as their own spokespeople and leaders. They took the most active role in spreading the word and garnering support – such as collecting more than 20,000 signatures on petition postcards.

A VICTORY – BUT ONE THAT PRESENTED MORE CHALLENGES

On June 14, 2005, the A–G resolution passed on a 6 to 1 vote. It required that by 2012, all entering freshmen would be required to pass A–G courses in order to earn their degree.

It was a significant victory for educational equality. But one that was frustratingly slow in coming. And while the results are already demonstrable – with the proportion of students completing college prep curriculum nearly doubling since 2005 (from less than 15% to 28%) – there is still much work to be done.

“I believe that A–G works – but it needs support in its implementation and it needs resources,” Walker said. “As a student, it’s frustrating to learn that certain board members don’t care about our education, or perhaps don’t think that we’re smart enough. Yet they represent our district – my district. I know that if they teach us new materials and provide the right support, we can learn and set a higher standard for ourselves.” 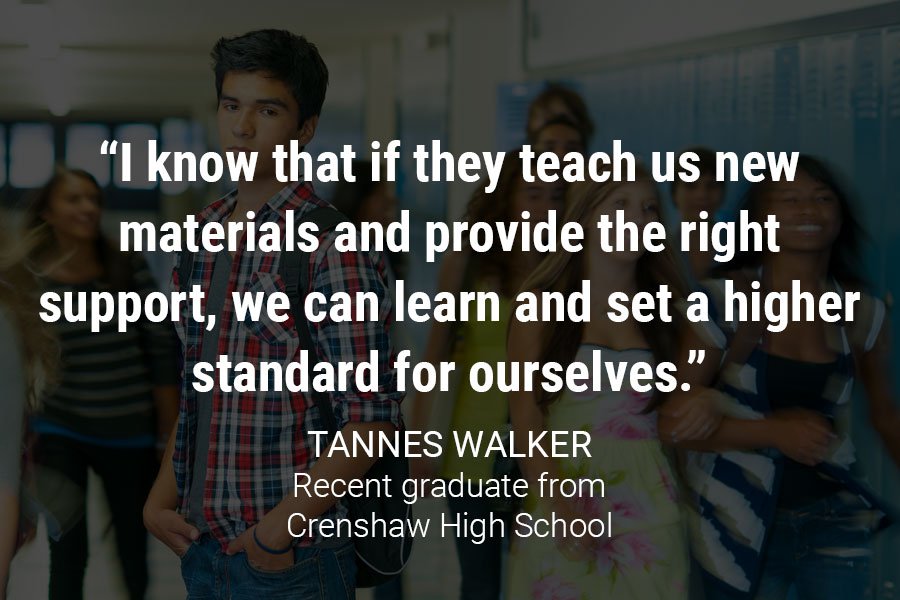 In Part 3 of our series, we’ll conclude with an examination of where things stand today, and how the same passion and commitment that led to the establishment of A–G courses are still desperately needed to ensure the dream of equality in educational opportunities is allowed to thrive.

Read Part 3 of the Walkout Series at The Walk Ahead: Ensuring Students Are Prepared After High School Graduation.

And we invite you to donate to United Way of Greater Los Angeles and support programs like our Young Civic Leaders Program that help empower students to become leaders in our local communities.