Suzette Shaw is the face of persistence.

“I often tell people, this could be you at any time. This could be your mother. This could be your sister, your grandmother, your cousin, your daughter,” Shaw said. Her story is both foreign and familiar. It’s a story that should remind us all that homelessness is an issue that might seem worlds away, but could become personal with an ease greater than we can imagine.

Suzette Shaw was the face of success.

The youngest of six children born to a teenage mother, she lifted herself up from her hometown of Yuma, Arizona — a town with the highest unemployment rate in the U.S. at 23.8% according to the Bureau of Labor Statistics in 2014 and where the per capita income was a mere $18,393 in 2006 according to the American Community Survey.

Suzette worked her way up to an accomplished career at a Fortune 500 company in Mountain View, California — a town with a similar population to Yuma but with an unemployment rate of 4.4% and an average household income of $119,683 in 2014 according to the Bureau of Labor Statistics and Onboard Informatics, respectively.

Suzette Shaw is the face of homelessness.

Despite her success. Despite her drive. Despite her prosperity — Suzette found herself out of a job and living in her car, living in shelters and eventually, thankfully, living in the safety and support of supportive housing.

Suzette Shaw STILL IS the face of success.

Suzette fights for herself. She fights for others. She started a women’s group in Skid Row where she fed attendees using funds from her EBT. She leads rallies. She inspires with poetry. She speaks with strength to remind us that her story could be anyone’s story.

Suzette is the face of homelessness AND the face of success. She has faced more than most of us can even imagine. #NeverthelessShePersisted

If you would like to help United Way of Greater Los Angeles support women like Suzette, we welcome a donation in honor of Suzette and the #NeverthelessShePersisted movement. 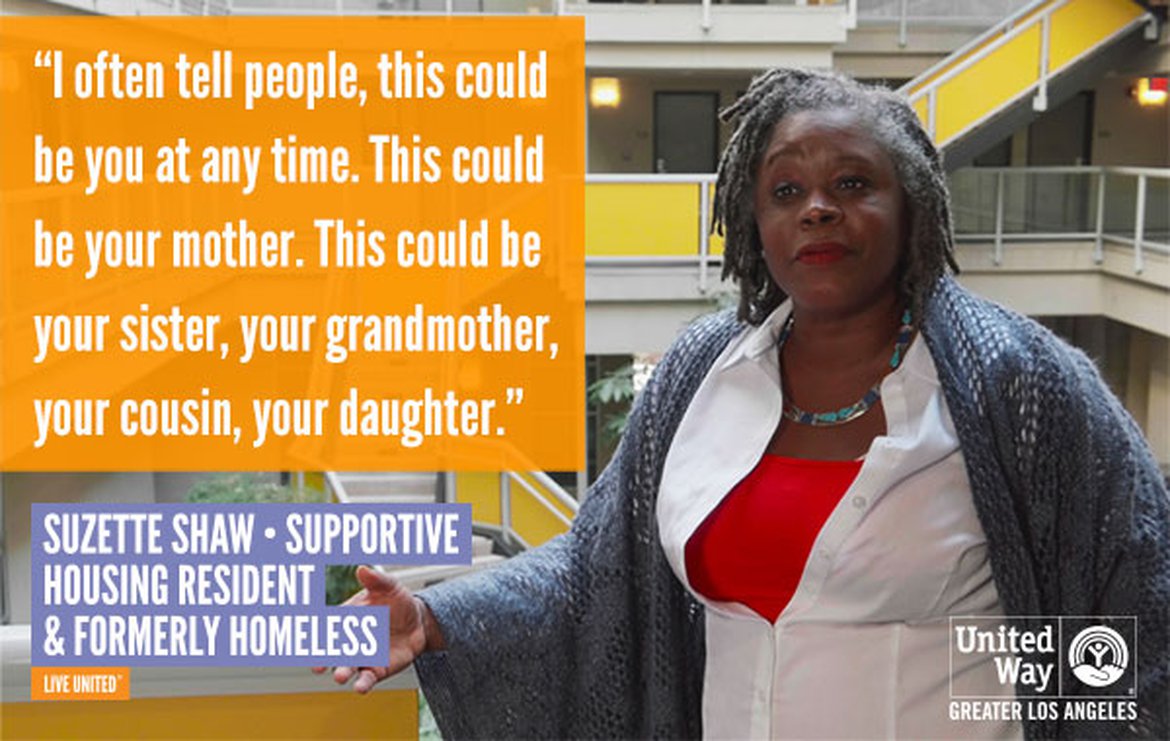