This week, a man became internet famous for doing something unfathomable—shaving his face on a New Jersey Transit train. 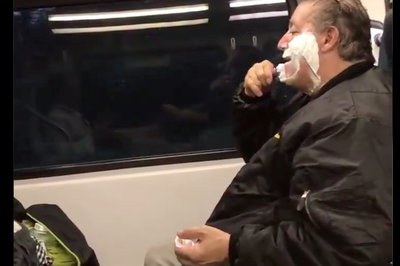 You’ve seen people putting on makeup (even eyeliner!) on public transportation, eating a massive Subway sandwich and engaging in any manner of personal rituals. But shaving is a feat because it requires a sharp blade and shaving cream.

Someone recorded the unique moment and so began a Twitter conversation about #theshavesman. The video was viewed more than 2 million times and responses ranged from amusement to disgust.

The shaver in question caught wind of the conversation and decided to reveal his backstory to the Associated Press.

His name is Anthony Torres. He’s 56 years old and does not have a home. When he took the train, he was traveling to visit his brother Thomas. He’d just spent days in a New York City homeless shelter, and he’d not had a chance to clean up before catching the train.

We all have those moments when we go home and decide that we’re not going to tell the happy couple with a new house about our recent breakup, the job we just lost or the diagnosis we just received. Not on this trip, we say. Maybe we even get a new jacket and get our hair trimmed to avoid an in-law’s criticism. We know what it’s like to rush to a train or a flight. It’s why airport kiosks sell toothbrushes, and flight attendants give them out on some planes. But many of us don’t know what it’s like not to have a home.

When it’s obvious that someone is homeless, either by their appearance or by their own admission, some may try to label these community members. At that point, the person loses two precious things: pride and social connection. Homelessness is an invisible condition. At the same time, it can be all that some of us see.

A person who has lost their home wants to keep their confidence, their sense of humor and their dignity, just like the rest of us. Torres, like us, doesn’t want to endure a look of disappointment or pity in his brother’s eyes. So, while many may find his public display of grooming undignified, it’s motivated by a deep longing to maintain personal pride before the people that matter to him.

“For myself, as a woman, I like to stay clean. I have to have some dignity....I never wanted to live like an animal. You lose your dignity on the streets. I had to eat a lot of humble pie and had to say to my friends, “I’m homeless. I’m scared.”

Where are you going to shave?

Once the internet, fickle but powerful as it can be, learned about Torres’ story it turned its shame towards the Twitter account that posted the video (which is no longer active). Soon there was an outpouring of people who saw the man behind the video and empathized with him. One person created a GoFundMe page called the Anthony Torres Assistance Fund, which has raised over $40,000 so far.

Anthony’s story reminds us of our most vulnerable neighbors here in Los Angeles County. Many Angelenos struggle each day to keep themselves, and their dignity, intact. Instead of making a quick judgment, take a moment to acknowledge our neighbors and consider donating towards solutions to end homelessness (see options below).

United Way of Greater Los Angeles works to create impact and change. We partner with organizations across Los Angeles County to help our vulnerable neighbors come home for good. You can see the work of one of our partners here. Visit EveryoneInLA.org for information about how you join us and help to end homelessness in L.A. County and find out more at UnitedWayLA.org.

If you’d like to hear more about Sue, check out our story Everyone In: Stories from the Frontline, Stories to End Homelessness - Meet Sue Gallagher.