Two wildfires burned in regions of Southern California for 13 days at the end of 2018. The total destruction caused by these fires includes 96,949 acres, 1,643 houses, and at least three lives. What the data doesn’t include are the numbers of low-income individuals and families who lost their jobs — and in some instances their family’s entire income — to the fires.

When the Southern California community experiences extreme devastation, residents are quick to act and support their neighbors in need. These wildfires were no different and a short amount of time, United Way of Greater Los Angeles, along with CBS Los Angeles and The Los Angeles Rams, raised more than $2.5M to support long-term wildfire recovery efforts for low-income individuals and families throughout Southern California. 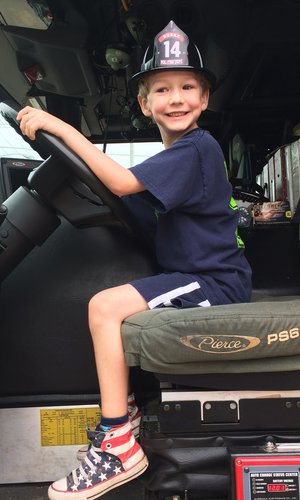 The supporters came from many different organizations, financial situations, and even locations countrywide. But the youngest supporter by far was an incredible young man named Teddy. This 7-year-old from Virginia, has always had a love for first responders and when he learned about the devastation caused by the wildfires in Southern California he jumped into action to help.

“People lost their houses and people lost everything in their house, all their loot,” said Teddy. “Some people died in fires, I know that. They lost all their belongings.”

But he did his research first and spent his days reading the newspaper and watching TV news with his parents in order to learn of updates in real time.

Then completely on his own, Teddy came up with the idea of Cocoa for California, a street-side fundraiser that would sell hot cocoa to help raise money to support the cause. The event was a resounding success.

“I think we had maybe 50 or 60 people, we had a lot…somewhere between 60 and 40, definitely not 30,” Teddy explained. “Those people came because they know about the wildfires and they thought ‘hmm it’s a good idea to give.’”

In total, Teddy and his family raised $751 and donated it to United Way’s Disaster Relief Fund which, to date, has raised more than $2.5M to support those low-income individuals and families affected.

For now, Teddy plans to continue supporting the firefighters that inspire him every day. When asked what he would like to say to the firefighters that battled for nearly two weeks to extinguish the fires — as well as the individuals and organization working to help people rebuild — his response was simply “Thanks for saving lives every day.”