Maria Cabrales was on the verge of becoming another disillusioned student in a seemingly endless stream of negative LAUSD statistics. But, today, she’s attending an Ivy League school.

Instead of helping her select the right high school courses to prepare for college, an overworked and dismissive guidance counselor told her to focus on a community college first and transfer to a university later. But that wasn’t good enough for Maria – who, with the help of United Way of Greater Los Angeles and other organizations, was able to keep her grades up, choose the right classes, and attend the college of her dreams.

It wasn‘t easy, and that’s why programs like the Young Civic Leader Program (YCLP) are so crucial in enacting real and lasting change in our educational system. Because every student deserves an open, opportunity-filled future.

YCLP is constantly – and successfully – advocating for more student-led access and input in the Los Angeles Unified School District’s decision-making process, and few issues demonstrate that commitment like the fight to provide A-G access to all students. That fight is now approaching its 50th year.

A-G courses are the series of high school classes students are required to successfully complete to be eligible for admission to the California State University and University of California systems. In 2005, only 18% of graduates completed their A-G courses. By 2016, thanks in large part to A-G adoption efforts by YCLP, that number had increased to 47%. Change is happening, but there’s still much work to do. 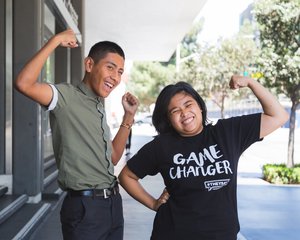 That is why the help of passionate young leaders like Alejandro and Sharell is critical to our success.

Entering their senior years -- Alejandro at Ramon C. Cortinas School of Visual and Performing Arts and Sharell at New Open World Academy -- both had a different path to YCLP. Alejandro joined at a teacher’s recommendation, whereas Sharell heard a presentation at her school and thought “why not?”

Since joining, however, their experiences have been very similar.

“I didn’t know the policies that were affecting my own school,” said Alejandro. “I knew there was something wrong, but not what to do about it.”

“I heard the presentation United Way gave at my school and decided I wanted to be one of those leaders who did things for the community,” she said. “At YCLP, we do things. We’re making things better for kids of our, and future, generations.”

For each of them, A-G -- and education in general -- is definitely a passion project.

“Everyone deserves an education,” said Alejandro, who is currently applying to 18 different colleges, many of them Ivy League. “We all deserve the chance to meet college requirements. To go as far as our strengths can take us.”

Sharell’s view of education has changed dramatically since joining YCLP.

“I used to think about education just in terms of myself,” she said. “If someone else was failing, that was their fault. But I’ve learned how the systems sometimes impacts those students. Failing students aren’t failures…they’re just falling, and we aren’t catching them.”

"It’s not just about our education. It’s about all those other students sitting next to us in class. It’s about students we’ll never even meet. Including future generations.”

When asked why other students should join YCLP, they’re not short on reasons.

“You learn how to engage with your peers and with adults about policy that’s affecting your school,” said Alejandro. “They build on what you’re good at and help you take advantage of the opportunities that are in the world.”

“It’s a place to be active...where you can be with people who think like you, and who want to make changes in the community. YCLP gives a voice to students. And for us, that’s what it’s all about!”