Over the past 11 years, United Way of Greater Los Angeles’ HomeWalk 5K run/walk has mobilized more than 95,000 participants, raised $8.6 million to end homelessness, and transformed the lives of over 19,000 individuals with the stability of a home.

As we continue our efforts get all of our homeless neighbors off the streets, we’re teaming up with the Los Angeles Rams to make the next HomeWalk bigger and better than ever! 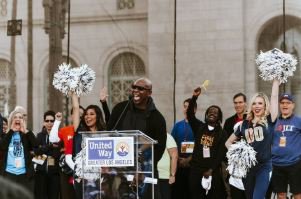 Through this partnership, a new experience for runners, walkers, fans and fundraisers of all ages, will be reimagined with special appearances and programs. This year, the event, typically held in the fall, will be moved to May 2019 with elevated goals to raise $1.5 million and engage 15,000 Angelenos to run/walk to end homelessness in L.A. County.

“As L.A.’s first professional sports team, we are committed to using our platform to make Los Angeles a better place for all who live here,” said Kevin Demoff, Los Angeles Rams Chief Operating Officer and Executive Vice President of Football Operations. “We began working with United Way more than two years ago because we believe strongly that helping our neighbors requires the support of an entire team. Through this signature HomeWalk partnership, we’ll be able to expand support systems farther as we work across all sectors to help bring our neighbors out of poverty.”

HomeWalk will also get a big boost from longtime supporters, the Conrad N. Hilton Foundation, who will once again be offering a match challenge.

“We are proud of our longstanding relationship with the United Way of Greater Los Angeles, which spans nearly a decade,” said Peter Laugharn, President and CEO for the Hilton Foundation. “We know that housing ends homelessness, and we are thrilled to have the Los Angeles Rams join in our collective efforts to end homelessness in L.A. County.”

The Conrad N. Hilton Foundation’s matching contributions of more than $3 million over three years have been a critical part of HomeWalk’s success in fundraising to date.

“We’ve been so proud to unite Angelenos annually in an effort to end homelessness by raising funds through HomeWalk, and now we are looking to grow our impact with the partnership of the Los Angeles Rams,” said Elise Buik, President and CEO of United Way of Greater Los Angeles.” HomeWalk started 12 years ago when Los Angeles was the homelessness capital of the nation. While we have made significant impact, for example the passage of Prop HHH and Measure H that will build the housing we need to help more of our neighbors move into homes, we are still facing a crisis with 57,000 men, women, children and veterans suffering on our streets on any given night.”