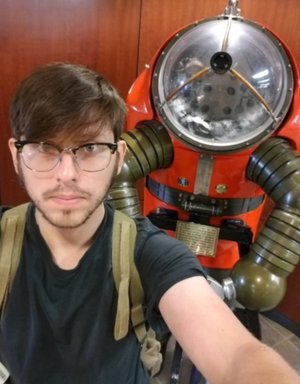 After serving in the United States Navy for six years on the USS Nimitz as a Navy Hull Technician 2nd Class, Dale “Matt” DeLizio was discharged honorably. He knew he wanted to continue a career in the water so the 33-year-old Michigan-native set his sights on the Dive Institute of Seattle, where he studied for nine months and earned certifications that allowed him to become a Diver, Maintenance & Testing Technician.

That experience kicked off his commercial diving career, which would take him to power plants on Lake Erie and Lake Michigan, and even to oil fields in Alaska.

It wasn’t until he was working in Panama, supporting a hydroelectric tunnel team, that he discovered his true passion: Remote Operated Vehicles (ROVs).

His experience with ROVs up to that point was limited to “heaving out the fiber optic tether” attached to the vehicle so that it had room to maneuver. But that one job was enough for Matt to know that actually manning ROVs is what he wanted to do as his career, and he set his sights on doing it with a company called Oceaneering.

The path to get there wouldn’t be easy. It would take him on more trips to locations like Washington State and on covert searches for Oceaneering engineers with whom to acquaint himself.

And through determination and the right resources, he made it onto the Oceaneering team where he worked for one and a half years doing testing with ROVs. He was happy. He was frequently traveling to see his brother in Los Angeles and he was seeing corners of the continent he never thought possible. But then he got laid off in June of 2016, when gas prices were hitting record highs nationwide.

The thing about Matt though, is that if nothing else, he’s adaptable. Never one to let bad situations get him down, he focuses on the next opportunity and the next challenge that life throws at him. So instead of lamenting the challenges he was facing, he packed his bags and went to live with his brother in Los Angeles.

Out in L.A., Matt sought out a variety of jobs and careers. He did — and still does — background acting on shows like Agents of Shield. He’s been a volunteer diver at the Long Beach Aquarium where he fed fish and waved to visiting children. And when they’re plentiful, he takes dive jobs out of the beach cities.

Matt was piecing together a life for himself in the City of Angels. But after becoming a unionized background actor through Sag Aftra, the jobs became few and far between. He suddenly found himself an underemployed veteran struggling to even get the unemployment benefits owed to him.

That’s when someone handed him a business card that would change his life.

Maggie Cutler, career strategist at United Way-funded United States Veterans Initiatives (US Vets), listened to Matt describe his career so far and suggested that he pursue his Non-Destructive Testing (NDT) certification. NDT is essentially a variety of analysis techniques used to “evaluate the properties of a material, component or system without causing damage.” It’s often used in underwater work and having that certification, on top of his copious others, would give Matt the competitive edge in his field.

“When you get qualified for NDT, it’s the master key because you can get into any industry as long as you’re willing to fight for it,” he explained.

Matt isn’t afraid to admit that the idea of becoming NDT certified scared him, especially considering the responsibility that came with the position and the amount of math he’d need to learn. He says he wouldn’t have considered it without Maggie’s encouragement and support.

That’s because Matt has Asperger's Syndrome, a developmental disorder that falls on the milder end of the Autism spectrum. Among other things, it made it hard for him to understand complex math and as a result, he’d spent much of his schooling in special education classes.

U.S. Vets helped make the certification as easy as possible for him. They helped him get funding from an organization called Community Careers to cover the cost of the class. Then United Way of Greater Los Angeles provided the funding he’d need to pay for gas and parking.

But more importantly, U.S. Vets took the time to teach him a new process for learning math.

“I went from having a hard time doing math to being able to do trigonometry and calculus overnight,” Matt emotionally explained. “It was the fact that someone was able to teach me something I had a fear of doing. They broke down the formulas for me and taught me in a way that I could understand it ‒ they showed me I’m actually teachable and trainable.”

He credits U.S. Vets with showing him that with support, he can accomplish anything.

Matt is no longer underemployed. Since receiving his NDT Certification, he went on to work for companies where he was responsible for ensuring compliance with safety and environmental regulations; and on oil and gas projects, where he utilized his NDT, military and post-military experience. He is even credited for saving an older woman who became stranded in a kayak on the lake where he was working.

Matt is now re-employed with Ocean Engineering and just like someone once helped him, he hopes to use his experience helping other veterans with their transition to civilian employment.