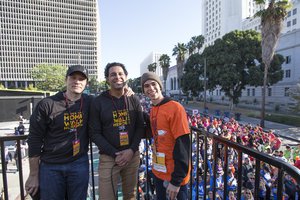 Longtime United Way supporter Jon Huertas joined thousands of Angelenos at the 11th Annual HomeWalk on Saturday, November 18. As the pre-show host, he got the crowd energized and brought awareness to one of L.A. County's most pressing issues. And his efforts were worth it because this year's HomeWalk raised over $1 million in funds that will go directly towards helping our most vulnerable neighbors find supportive housing.

The actor, who plays Miguel on NBC’s hit sophomore drama, has been a passionate supporter of the cause, due in part to his own personal experience. Though Huertas has been a successful working actor for the past two decades, he pointed to a trying time in his past when he found himself living without a roof over his head and explained why he’s made it his personal mission to end homelessness in his community. Learn more about his incredible story on ETOnline.com.