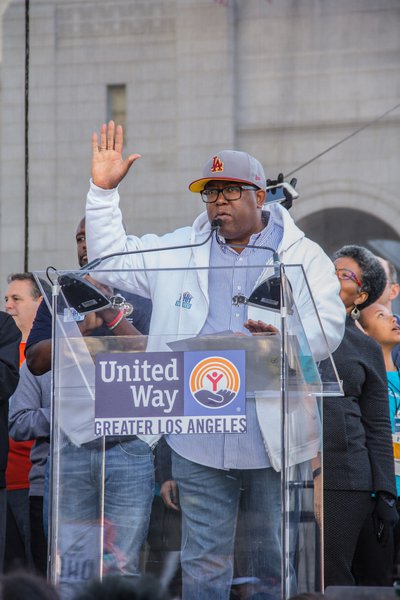 Mark Ridley-Thomas is one of L.A.’s most influential advocates in the fight against homelessness. Since being first elected to public office in 1991, he has distinguished himself as an effective leader for many of L.A. County’s most pressing issues.

Day in and day out, he encourages Angelenos to educate, engage, and empower themselves and their communities. Through innovative and impactful strategies, Supervisor Ridley-Thomas has been able to rally support and spark change throughout his district. One such change he spearheaded was the passing of Measure H. This voter-approved ballot initiative is expected to raise $355 million annually over the next ten years to provide housing and supportive services to people experiencing homelessness, as well as people at risk of homelessness.

Chris Ko, Director of Homeless Initiatives for the United Way of Greater Los Angeles, recalls his steadfast confidence that the measure would pass. “Without him, there would be no Measure H, it's as simple as that,” he says. “And on election night when all of us were dejected at the early results, he looked at me with a firm confidence and simply said, ‘We'll get there.’ And we did.”

When Measure H passed, it was a victory for all of L.A. County. With 57,000+ homeless individuals living on the streets on any given day, clear action needed to be taken and Supervisor Ridley-Thomas was the perfect candidate to help lead the fight.

“Supervisor Mark Ridley-Thomas made an intentional decision to make ending homelessness a primary focus of his,” said Ko. “He is clear to point out the sobering and weighty nature of the matter, but people also don't realize how funny and cheerful he can be. He is full of life.”

Supervisor Ridley-Thomas brings passion and energy to all he does. As a proud supporter of HomeWalk, he’s been part of the opening ceremony for a number of years. His impassioned presence is one that can’t be missed.
From serving on United Way's board to his ability to rally support for HomeWalk to the push on Measure H, he continues to model leadership in every sense of the word. He knows the fight isn't over, and he invites all parties to join in.

“It's rare to have an elected official who can be so pointed on an issue while being so inclusive in the coalition he seeks to build,” said Ko. “He embodies United Way's ethic of leading with breadth and depth.”

You too can make a difference in your community. See how you can get involved with United Way.