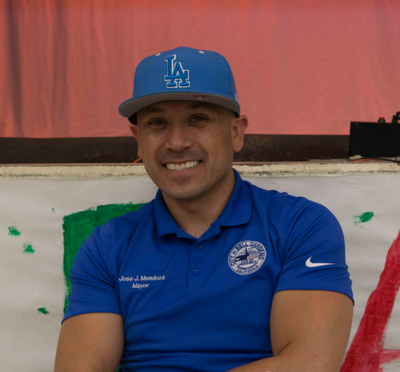 Mayor Jose J. Mendoza didn’t plan for a career in politics. He was happy in his role as a full-time educator and dance teacher, but after seeing his community face hurdle after hurdle, he knew he had to step up.

As the son of immigrant parents, he grew up speaking very little English and found it hard to keep up in school. But the support of his family and the Bell Gardens school community pushed him to carry on with his education despite the many odds stacked against him.

After receiving his K-12 education in the Bell Gardens school system, he went on to attend California State University, Long Beach where he obtained his Bachelor of Arts in Liberal Studies in 2005. He knew he wanted to give back to the community that he grew up in so he became an English teacher at Bell Gardens Intermediate. Early in his career, he was tasked by the school principal to organize a community-wide fundraiser to benefit the students and that’s where he saw an opportunity to combine his two passions: teaching and dance. He put together a mini-showcase of dance numbers led by his students and it was a resounding success! The principal took notice and offered him the chance to lead the school’s performing arts program. What started as a dance troupe of 14 female students eventually grew to Mendoza teaching over 200 young men and women today. In a community where sports and more traditional extracurricular activities are the norm, Mendoza rallied a diverse group of students to join his program and really embrace dance.

But despite the program's success, it still faced budget cuts and community opposition. The obstacles he faced inspired him to get involved in local politics as a councilman. After some time, he was ready to truly influence change and decided to run against the Mayor, who was up for re-election. After weeks of door-to-door campaigning, he was named Mayor of Bell Gardens in January 2017.

Mendoza works hard to make his home city a better place. And when he’s not holding council meetings or performing his other mayoral duties, he still teaches dance at Bell Gardens Intermediate’s After-School All-Stars program. His afternoon classes teach students everything from modern dance and Bollywood to hip hop and jazz.

What started as an after-school curriculum flourished into a model program for the city of Bell Gardens. His team represented the city in various competitions, professional performances, and even performed for former Governor Schwarzenegger. And he has a room full of dance trophies to show for it.

Through his teachings, students have learned about self-esteem, healthy living, freedom of expression, and positive ethical values. It’s clear to see Mayor Mendoza has made quite the impact on the city he grew up in, which is evident through his political success and through the letters students have written him, which now line the walls of his dance room. Mayor Mendoza strives to break barriers in his community every day.