The weight of the pandemic has affected millions of people in the U.S. In Los Angeles County alone, more than 50% of Angelenos filed for unemployment and the numbers continue to grow. This does not include the several thousands of individuals who do not qualify for government support, like Steven Conaway, also known as the Peanut Man.

Mr. Conaway has been a staple in his community since 2011 when he parked his U-Haul moving truck turned peanut truck on Crenshaw Boulevard in Los Angeles.

His journey becoming the Peanut Man was a vision years in the making. He knew back in high school that he was destined to serve up some kind of delicious treat, but wasn’t sure exactly what until several years later, a friend mentioned he was selling his peanut roasting machine.

“I started saving money. I spent four years recycling bottles and cans so I could buy the truck to get started and I was $600 short,” recalls Conaway. “I had a lottery ticket. And I went and cashed it and it was a winner for $599. Everything just started falling into place.” 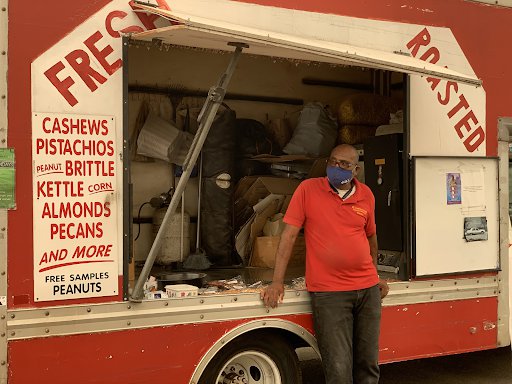 Steven Conaway - The L.A. Peanut Man
Eventually Steven began to call Crenshaw Blvd. home to his truck where it became the famed business it is today. The smell of roasted peanuts lures in the newcomers who quickly get to know Steven. They often become regulars. Regulars he has now known for years and whose orders he knows by memory.

To this day, his regulars not only come to purchase peanuts and other varieties of nuts, but to drop off recyclables for Steven to cash in, making sure he can continue to stay afloat.

COVID-19 and the way it has crippled so many businesses, feels like a case of bad luck for Mr. Conaway and so many others.

In this story, Mr. Conaway shares the effects of the pandemic--the story of how he and so many others are struggling to survive. We are thrilled that we've been able to help him and his business make ends meet through rapid response funds so that he can continue to serve people delicious peanuts. He reminds people that it is their support helping him continue to pursue his passion.

Thanks to our partnership with BET, local community organizations like the YWCA of Greater Los Angeles, and our passionate donors who continue to give even in these unprecedented times, we help support people like Steven Conaway.