As the Los Angeles Rams close out the 2017 season, we aren’t just celebrating their wins on the field, but also the incredible impact they’ve made off the field.

Since making their return to the City of Angels in 2016, the entire Rams organization has stepped up to help create better opportunities for the L.A. County community. Check out six inspirational things the L.A. Rams did off the field in the past year. 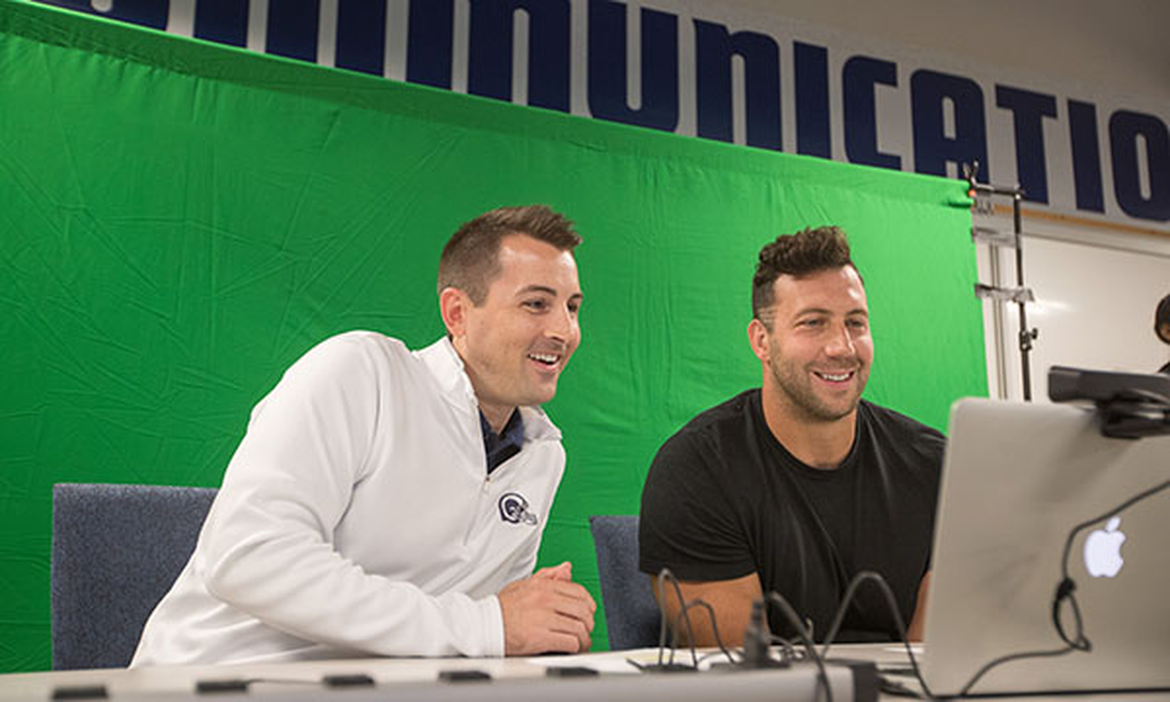 1. Inspiration and education goes digital
On Tuesday, October 3rd, Connor Barwin (Rams linebacker), J.B. Long (Voice of the Rams) hosted a virtual classroom experience, in conjunction with United Way of Greater L.A.’s Character Playbook program, for students from six different schools across the L.A. region. During the remote video session, students engaged with Barwin and Long on the importance of character building through conversation and activities designed to celebrate and explore the aspects of healthy relationships. The interactive, online learning session gave students the opportunity to explore the effects of media, portrayals of advertisements, peer influences, advantages of sports for youth, and the moral qualities of individuals with good character. 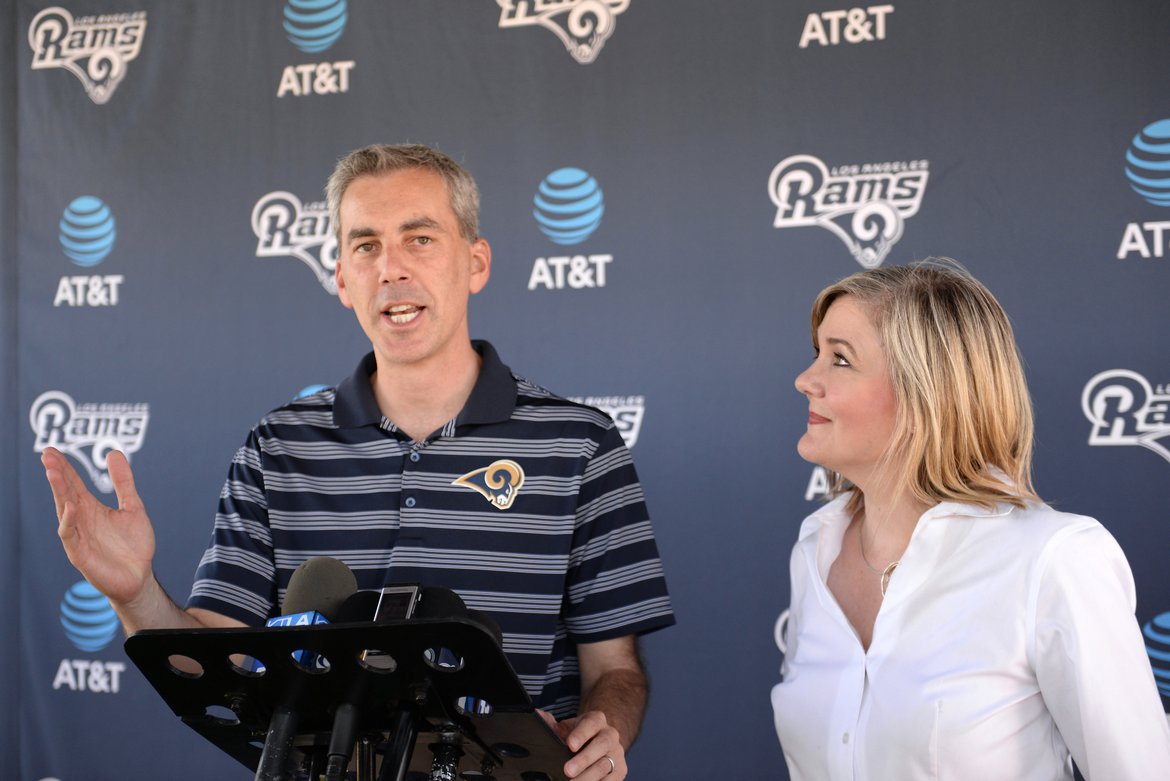 2. Kevin Demoff joins United Way of Greater Los Angeles’ Board of Directors
Kevin Demoff, Rams EVP of Football Operations and COO, signed on as Campaign Chair for United Way of Greater Los Angeles’ 2017-2018 Board of Directors and continues to lead the Rams in their community engagement efforts.
“Los Angeles is more than just a place we play football – it is also where we live and work. Teaming up with United Way gives us an opportunity to create change in our own backyard,” said Demoff. “The Rams are inspired to be partnering with United Way to transform the lives of our fans and neighbors.” United Way and the Los Angeles Rams announced an exclusive partnership earlier this year to to tackle education challenges and poverty in Los Angeles County. Read more here. 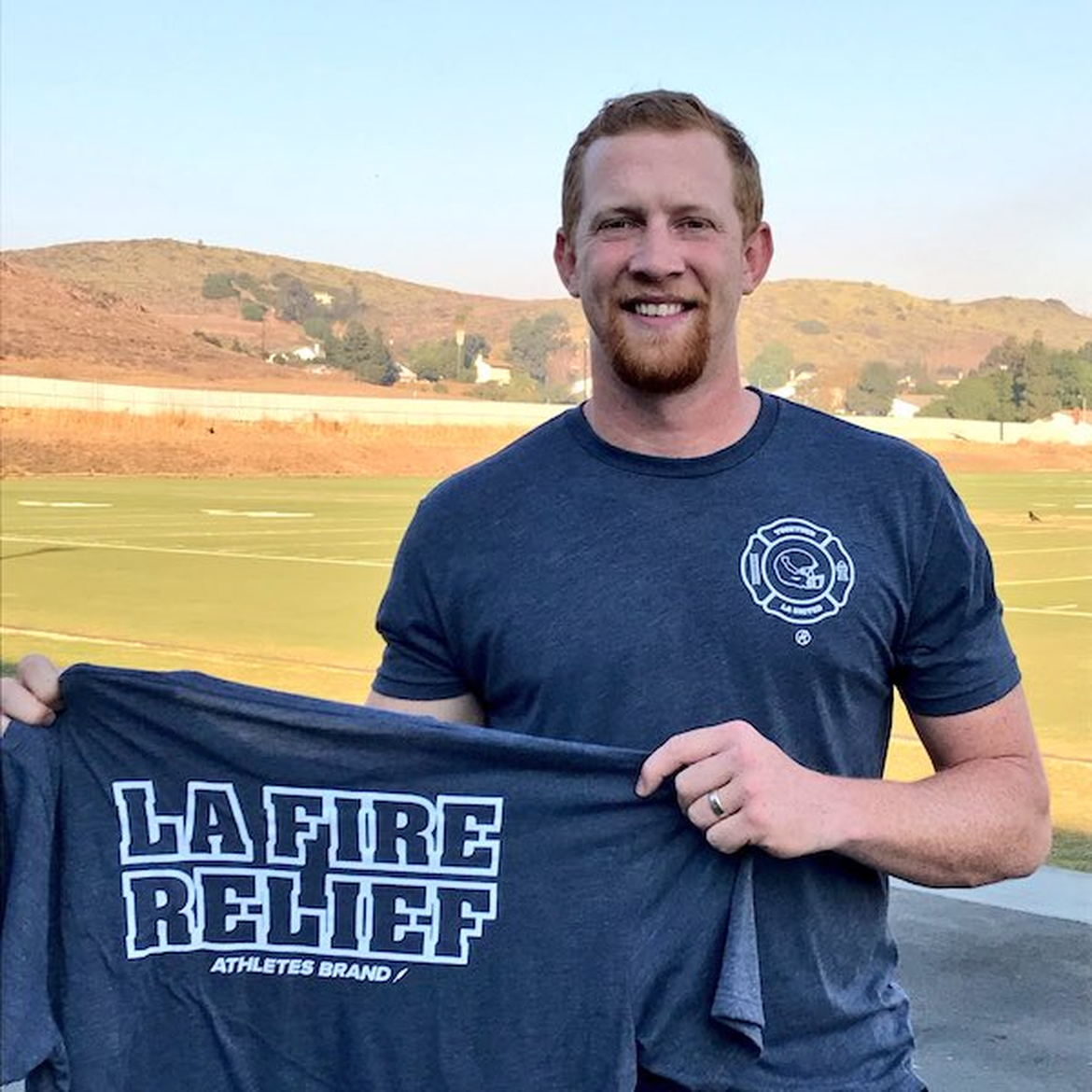 3. Stepping up to support SoCal wildfire relief efforts
In the wake of the Southern California wildfires that displaced thousands of people, Los Angeles Rams punter Johnny Hekker teamed up with Athletes Brand to co-design a t-shirt to help raise funds for the relief efforts. “Partnering with United Way of Greater Los Angeles and Athletes Brand is a great opportunity to bring relief and unified support to the communities affected by the recent wildfires,” said Hekker. “I hope that these combined efforts can help the families, businesses, firefighters and all those affected by this tragedy as they protect and restore their community.” 100% of the proceeds will benefit United Way’s Southern California Wildfire Fund and can be purchased here. 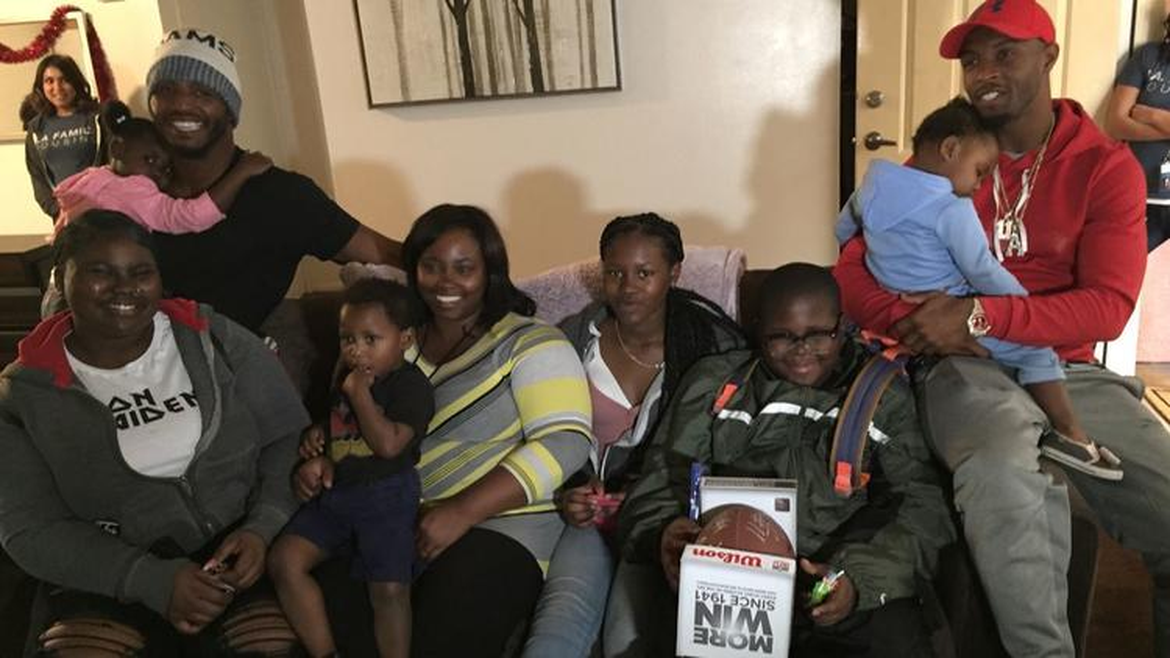 4. Helping families find holiday cheer
L.A. Rams wide receiver Tavon Austin and defensive end Robert Quinn teamed up with non-profit LA Family Housing and United Way of Greater Los Angeles to provide Shwonna Cox and her family of six with a fully furnished, four-bedroom apartment ahead of the holidays. On top of purchasing everything from beds to televisions for the apartment, Austin and Quinn also left a Christmas tree and presents for the family to enjoy. Check out more highlights of this heartwarming day here. 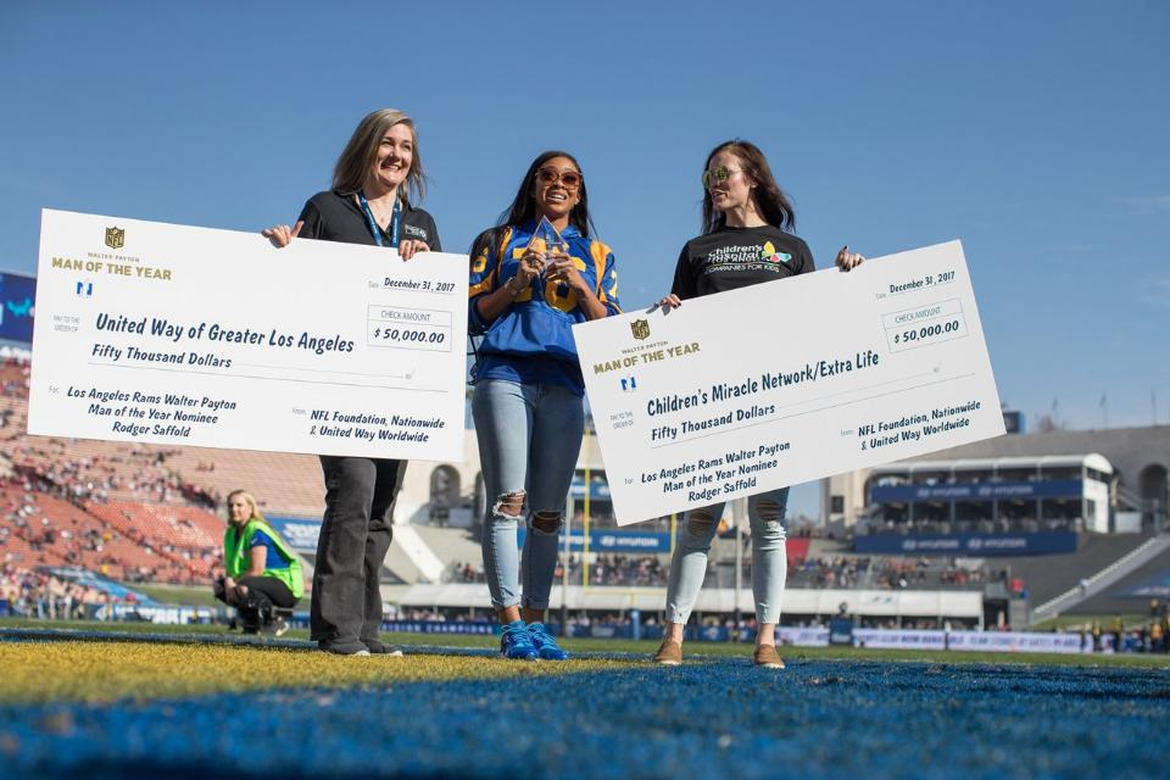 5. One team, One LIVE UNITED Dream
The Rams designated their December 31st game against the San Francisco 49ers as as the LIVE UNITED game in support of the United Way of Greater Los Angeles. Elise Buik, United Way of Greater Los Angeles President & CEO, was joined by Pro Football Hall of Fame member Eric Dickerson during the ceremonial lighting of the Coliseum’s cauldron to kick off the game. Rams representatives also presented a $50,000 check to United Way to help expand the Character Playbook program, in addition to hosting a 50/50 Raffle that raised over $20,000 that will go towards United Way’s efforts to end homelessness and poverty in L.A. County. 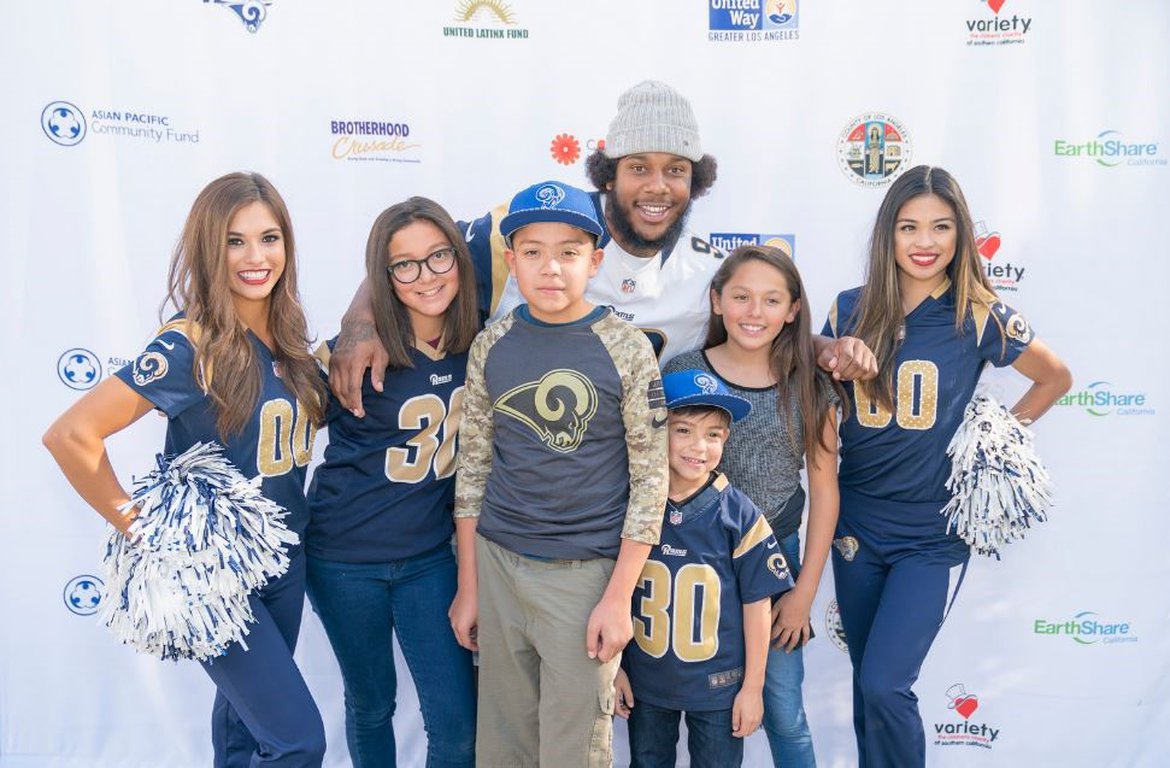 6. Rams Nation out and about
Much to the delight of their many fans, members of the Rams organization made special guest appearances at community events throughout Los Angeles. From NFL Hall of Famer Eric Dickerson getting the HomeWalk crowd pumped up to the Rams cheerleaders reading books to kids at the annual Fall into Literacy event to many more fun cameos, there was no shortage of the Rams making a difference in L.A.