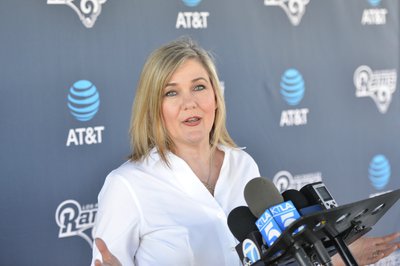 United Way and the Los Angeles Rams are proud to announce an official partnership to tackle education challenges and poverty in Los Angeles County. This newly formed partnership will help United Way reach its $63 million annual goal to transform lives and communities across L.A. County.

"We’re excited to continue working with the Los Angeles Rams in order to ensure all children in L.A. County graduate from high school ready to succeed in college and careers,” said Elise Buik, President & CEO of United Way of Greater Los Angeles. “A quality education empowers children to create their own pathways out of poverty, meaningful lives, and sustainable careers – which is exactly what they deserve.”

“Los Angeles is more than just a place we play football – it is also where we live and work. Teaming up with United Way gives us an opportunity to create change in our own backyard,” said Rams EVP of Football Operations and COO, Kevin Demoff. “The Rams are inspired to be partnering with United Way to transform the lives of our fans and neighbors.”

Education-focused initiatives include a career day and job shadow opportunities that will expose Los Angeles County high school students to careers in the sports industry, as well as the Fall into Literacy Community Book Festival on September 16 – a family-fun event attended by thousands – that fosters a culture of reading at home. In addition, United Way and the Rams will host a “Welcome Home Thanksgiving Dinner” event with newly-housed residents. The year’s activities will be highlighted on “Live United Day” when the Rams host the San Francisco 49ers at the L.A. Memorial Coliseum on December 31.

Kevin Demoff, who has been with the Rams since 2009, was also announced as United Way of Greater Los Angeles’ Campaign Chair for the 2017-2018 Board of Directors.