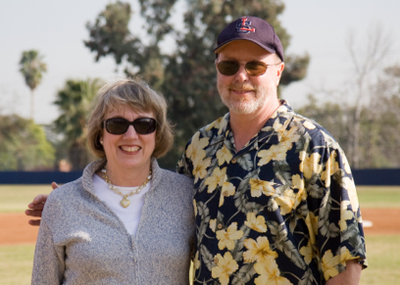 Bob Kohorst uses a simple adage to explain why he and his wife Shelley Allen devoted so much time to attending their sons’ sporting events when they were in school: “There is no substitution for showing up.”

It’s a phrase that perfectly captures the level of dedication that has guided their actions throughout their lives – and which has carried into their philanthropic work as Million Dollar Roundtable donors for United Way of Greater Los Angeles.

But their involvement with United Way only tells part of Bob and Shelley’s “service” story. In fact, you might say their passion for making a tangible impact on communities has taken them far.

Never one to back down from supporting a cause he believes in, Bob recently accepted an appointment as the United States’ Ambassador to The Republic of Croatia – where he and Shelley will live for the next three years.

“I had thought for a long time that I'd like to do something in government as a way to give back to the community,” Bob explained. “So after the election, I expressed my interest to the White House. Basically, I asked if there was something interesting to do, and they said ‘would you like to be an ambassador?’”

He and Shelley jumped at the chance.

“We’ve always felt very fortunate to have had some success in business, and thought it was important that we give back to our community with both time and money,” he said. “To thank the United States and thank our society for helping us become successful, we want to give back and help others. To a great degree, that's what the foreign services are all about – dedicated servants looking for a way to give back.”

“Here [in Croatia], you can truly make an impact,” Bob related with Shelley from their Ambassador’s residence. “The country is very pro-American, so it's easier to get access to the government officials and have them listen to what you have to say. And being in the Balkans, it's in an interesting part of the world where there are so many important issues that need to be resolved. It's a really interesting job from many different perspectives. I'm not sure where else I would want to go.”

It’s a new adventure, to be sure. And one that will allow Bob to leverage the extensive and varied experience he’s acquired over the years.

After receiving his B.S. in Accounting from Dayton, and his J.D. from the University of Michigan, Bob clerked for Judge Albert Engel of the U.S. Sixth Circuit Court of Appeals before joining private practice firms, first as an associate, then as a partner. Then, in 1984, he joined the self-storage company Public Storage as President of its Private Placement Group. From there came a string of successful tenures – from his role as CEO of Tiger Shark Golf and Masquerade International, and founder of both Petcetera Originals and KH Financial. It was this last venture that led to his creation of Everest Properties, in Pasadena, which he continues to own. In addition, he has served on numerous private and public boards, was chairman and director of United Investors Real Estate, and is a director of Professional Business Bank in Pasadena.

An extensive resume, no doubt. But even so, Bob is quick to admit that his new role has much broader responsibilities than those he’s accustomed to.

“It really hit me when I was taking the oath of office,” he reflected. “You stand up and you raise your right hand and you repeat ‘I solemnly swear to represent the United States.’ And it was very emotional. Much more so than I expected.”

“I’d read the oath, but then you raise your hand and realize you're really representing the United States of America in a serious way.” — Bob Kohorst

“When you get here, you realize you're not just the ambassador. You're also what's called the Chief of Mission,” he said. “Being the Chief of Mission means that you are the personal representative of the President. You're vested with a written letter from him that delegates all of his authority to this office.”

Not surprisingly, “rising to the occasion” is something Bob and Shelley are quite accustomed to. Because not only have they contributed extensively over the years toward creating lasting, transformative change for those in Greater Los Angeles, they also made an additional $100,000 pledge prior to leaving for Croatia.

It’s just one more example of how their long standing support for United Way remains as strong as ever.

And to think it all started with a friendly request.

“We initially got involved in United Way because a good friend of ours asked if we would make a donation,” Bob says. “It was Dominic Ng from East West Bank, who also sat on the United Way Board. Honestly, we just said yes because he asked.”

“But the more we learned, the more involved we became,” Bob said. “Because United Way is an organization that directly impacts the local community. So many charities are national in scope, and the impact never really hits home. But with United Way of Greater Los Angeles, the efforts are really focused in the greater L.A. area – so we knew the money we were giving was going to directly benefit people in our community.”

“We donate to a number of charities. Some are more broad, and some are more mission-focused. But United Way makes a big impact on the local community, and that’s something that was really important for our whole family. We wanted to live in – and contribute to – a community that was always getting better.” — Bob Kohorst

They bring that sense of community – and the desire to make a direct impact – to their new roles as well.

“The biggest thing to remember is that giving back to our communities – whether it's being an ambassador, or donating to the local United Way, or simply lending a hand – is always worthwhile,” encouraged Bob. “I happen to have a job that's kind of high profile, but it’s still just giving back.”

“You can give back in lots of ways. We’ve always been glad to give back – not just with money, but with time spent helping our community. Not only is it a really good thing to do, but it’s also very fulfilling.” — Bob Kohorst

“It’s impossible to overstate how grateful we are for the generosity of people like Bob and Shelley,” says United Way of Greater Los Angeles' President and CEO Elise Buik. “Their ongoing commitment to sharing their success with others is a true inspiration.”

As for his time as ambassador, Bob and Shelley expect this three year stint will be enough time overseas.

“I don't really expect to do another term,” he said. “Our grandson is going to be seven years old when my term is up here, and that's about the time little league starts.”

“And we’re not going to miss little league!”