Diana Renoj’s transition from middle school to Esteban Torres High School in East L.A. wasn’t an easy one. The new school was further away from her house, her father wasn’t giving her any support to complete high school, and she was unable to focus on her studies. She thought maybe school wasn’t worth it.

The road to Berkeley has been riddled with challenges. At home, her mom was incredibly supportive of her education but her father wasn’t and as a result, the support she received was incredibly divided. On top of that, her high school only employs one academic advisor for the entire student body.

It wasn’t until her senior year that she started learning about options for higher education. That was only because she got involved in afterschool programs like the Take Action Leadership Campaign and United Way’s Young Civic Leaders Program (YCLP).

It was through YCLP that she really focused on making a difference for others.

“I’ve always been one to help others and put others before me. I have experience not necessarily with what people go through living on the streets, but having a hard time paying rent and all that,” she explained. “So I kind of grasped onto that idea and began thinking that I could help people by being in this group of student leaders.” 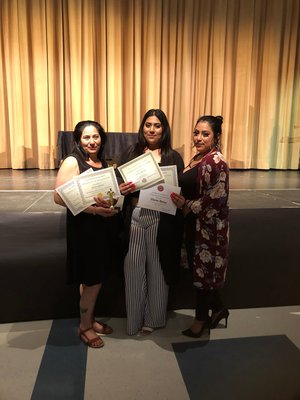 Thanks to the Take Action Leadership Campaign she was introduced to her school’s college advisor, who taught her to make a difference for herself.

“I kind of got attached to him because he was the only one that pushed me to do more than a Cal State. He opened my eyes to my GPA and showed me I can do more,” she said.

Now taking five classes at Berkeley this semester, Diana feels proud of how hard she worked to get there.

“I’m the first one to go straight to college from my family. For it to be a school like Berkeley, I feel like it’s a lot of pressure, but all in all it feels really nice to know that I was able to overcome the things that I went through throughout my life to get here.”

And when asked what advice she’d offer current students in the position she was in, Diana had this advice to offer:

“Believe in yourself. There are people out there that actually care about kids in the inner city so they shouldn’t give up. They should reach out to places like United Way’s YCLP because it is out there. You just have to go out and find it for yourself if you really want it. There are going to be bumps in the road, but there are ways to get over those bumps.”