On Sunday morning we were all shocked and saddened to learn of the sudden passing of Cameron Boyce. Known to millions of fans as Luke from Disney’s hit show Jessie, and Carlos from the Descendants, he was also widely known as an advocate and philanthropist.

At United Way we had the privilege of working with Cameron for nearly a decade at our annual walk to end homelessness, where he championed our cause through his celebrity and social media influence. Since first appearing onstage at HomeWalk in 2010 in front of thousands, he was there for us, and those we serve, every year since.

It is with a heavy heart to have lost such an incredible young man, one who accomplished so much in his short twenty years.

He truly was what he recently referred to as a “difference maker” -  crediting a long line of difference makers in his family, that cultivated his passion to help make the world a better place.

HomeWalk, and the impact it has had for thousands of our homeless neighbors, would not be what it has become today without Cameron.

We thank Cameron and the Boyce family for their dedication and passion, inspiring all of us to do more for our most vulnerable neighbors. Cameron’s light will continue to shine in the work that we do, and we could not be more grateful than to have had his beautiful smile and energy each year. Thank you Cameron for giving us a great gift- you. 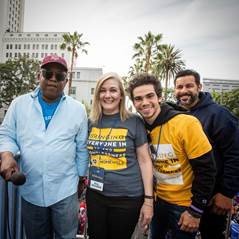 "Many people have the heart to give back, but a lot don't know how to. I try to be the bridge for those people– whether that means getting them involved in one of my campaigns or inspiring them by showing them a blueprint of how to get others engaged."
- Cameron Boyce

If you would like to honor Cameron's legacy, donate to Cameron Boyce Foundation
or learn more about HomeWalk here.