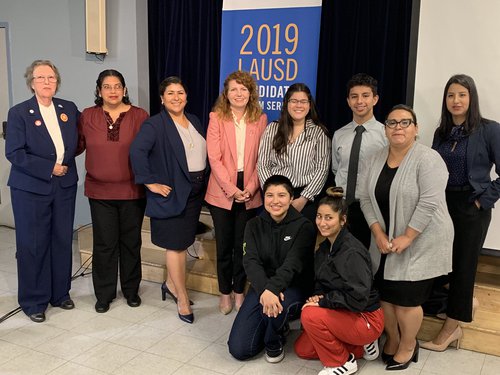 After nearly one year without proper representation on LAUSD’s Board, parents and students of Board District 5 were ready to elect a representative that supports parent engagement, increasing pathways for college readiness and is committed to the success of English-learners in their district. But first they wanted to meet the candidates of the May 14 runoff election face-to-face.

On May 8, 100 parents and students took to the stage to ask Board District 5’s runoff candidates — Heather Repenning and Jackie Goldberg — the hard questions during the second parent and student-led candidate forum hosted by United Way of Greater Los Angeles and Alliance For A Better Community this year. The issues they focused on were very important to the student populations’ continued success: language barriers, students feeling supported by their teachers, lack of resources, safety, and family participation in a child’s education.

The representative eventually elected to the seat won’t just represent a wide and diverse student population, they’ll represent a portion of the largest school district in the nation, which, among many other things, oversees an $8 billion budget that impacts over half a million students in Los Angeles.

To see photos from the first student-led forum, hosted on February 16, click here.