When you give to United Way of Greater Los Angeles, you aren’t just helping us end poverty and homelessness -- you’re supporting dreams.

Jackie Perez’s story is a great example. Because as far as “improbable starts” to a film and television career, her story deserves a screenplay of its own. After studying engineering at MIT, she worked in nuclear engineering for the Navy for five years. Her cruiser was sent to the Middle East where it supported Operation Enduring Freedom and Iraqi Freedom, performing anti-piracy operations off the coast of Yemen and Somalia. No longer in active duty, she continues to serve as a Navy Reservist. In fact, she’s currently the City Outreach Officer for the West Coast -- performing math and engineering outreach for students from elementary school to college.

But despite being third generation Navy, her heart was elsewhere.

“Throughout that entire time, movies had always been on my brain. But it wasn’t until I was in the Navy that I realized people came out to Hollywood and made movies as a career. So when I decided that I was going to get out, I came out here to figure out what I wanted to do in the industry.

“I love horror movies, so I knew that was my focus. And over the last four years I decided that screenwriting was where I wanted to grow my craft. Honestly, I wasn’t prepared for the entertainment industry because I had zero connections, and it’s all about who you know in entertainment. So it was very difficult to even get an internship -- even with an MIT degree and five years’ experience. I think I sent out over a hundred resumes and got three responses.” 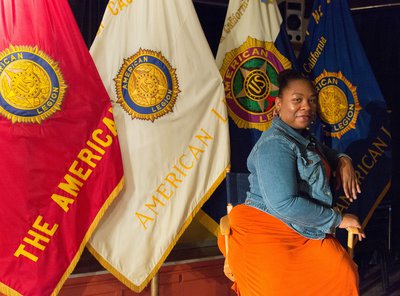 Similarly, Rashaan Dozier-Escalante took what might be called a roundabout route to her current career in film. Rashaan.jpg

Growing up, she was encouraged to follow a fairly traditional path. “My parents wanted me to get a Masters degree and find a secure job,” she says. But life took her in a different direction. She became a Physical Security Analyst in the federal government, (“think of it as ADT on steroids,” she says), and spent several years in the Army Reserves serving in several high-profile, security-clearance level locations, including the Pentagon. “It was a wonderful career, but it wasn’t my passion.”

The final push she needed to make a change came on 9/11, when she learned that the person who’d taken her place in her federal fellowship role at the Pentagon had been killed in the attack. “It was a turning point for me, to say that at some point you’re going to have to pursue your dream.”

In her role, she’d worked with contractors to help produce Public Service Announcements and documentaries for various non-profits. And she quickly felt the satisfaction that the creative outlet allowed her. After leaving the government, she ultimately started her own company, writing and directing PSAs, documentaries, and training films for the government. That’s not to say there weren’t roadblocks. Shortly after she left the government, the market crashed -- forcing the newly single mother to temporarily move back in with her parents.

What links these women -- aside from their military background and drive to follow a creative dream -- is the support they’ve each received from an organization called Veterans In Film and Television (VFT).

Started in 2012 by two veterans as a true grassroots organization, VFT exists to unite current and former members of the military working in the film and television industry, providing everything from targeted internship opportunities, to roundtables, workshops, classes, and fellowships. It now has chapters in Los Angeles, Chicago and New York, with over 3,000 members in 46 states and six countries.

But even so, Jackie and Rashaan came across VFT in wildly different ways.

Fleet Week NY.jpg “I was on my ship getting ready for a reactor safety examination,” says Jackie. “I was online searching for any kind of networking that I could start before I moved out to the city. Through those searches I found VFT. They had just launched their new website, so I was able to start networking before I even moved to L.A.”

Rashaan, on the other hand, learned of VFT through a military writing retreat with WGA West. “One of the gentlemen asked if I’d ever heard of VFT. When I said no, he encouraged me to check out their website. That’s how I found all these wonderful people,” she says. “It’s been great.”

For both women, the benefits of associating with VFT have exceeded their expectations.

“I came to Hollywood to be part of a community that would allow me to do the things I’d always wanted to do, which was be creative,” says Rashaan. “In VFT, I found brothers and sisters in arms who had the same dreams.”

But as fulfilling as the creative outlet has been, there’s another part of her new career that’s made the biggest impact on her.

“I did some PSAs for Teenline -- a peer-to-peer counseling call-in hotline that’s managed by teenagers. The message was about suicide prevention, specifically focusing on the LGBT community, but basically for everyone who feels they need to have someone to talk to.”

“It was one of the best experiences of my life, because it opened my eyes to things that I really had not been paying attention to. To hear a child sit there and say her deepest fear and her deepest hurt… that kind of transformed me.” You can see some of Rashaan’s work for Teenline here.

Rashaan was recently chosen for an HBO internship and is extremely excited about this next phase of her new career.

After two years working at CAA, Jackie went to work for Justin Lynn’s production company Perfect Storm Entertainment. She started a Masters of Fine Arts in screenwriting choosing to focus more on her writing. She left the “assistant trap” as she calls it and returned to the Navy Reserves -- so that she could focus on writing while keeping one foot in engineering as well. 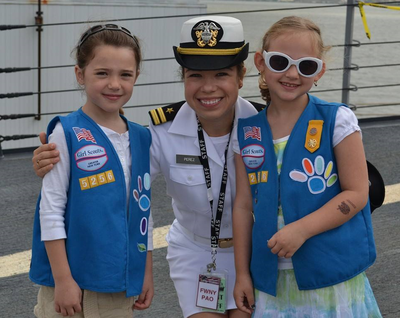 And that focus has definitely paid off.

"I've been fortunate enough to receive the right to adapt and direct a short story by Stephen King called ‘Beachworld,’ and I’m working with a number of VFT members to shoot it later this year. As a horror lover this is a dream come true!"

Thanks in part to VFT and financial stability assistance from United Way, both Jackie and Rashaan have enjoyed a successful transition to civilian life after their time in the service. But they realize it’s not the same for all returning veterans.

“At the end of the day, I would want people to have an open mind and an open heart about veterans,” says Rashaan. “There are things they see that the common person does not. And there are things they go through that the common person does not. What a veteran needs is compassion and mercy…for people to have an open heart and open ears to help them through challenging times.”

Jackie agrees. “Everyone says ‘thank you for your service,’ which is great and we appreciate that. But when less than one percent of the population has served, sometimes people have never really spoken to, or gotten to know a veteran.”