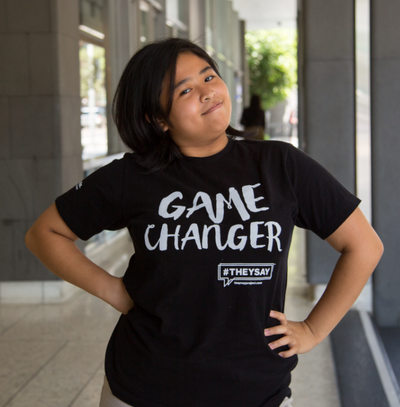 “I was that quiet person that didn’t really do anything,” recalled high school senior Sharell, when talking about her first year at New Open World Academy. “[But] I wanted to be a leader who did things for the community.”

There’s no doubt Sharell has accomplished that goal.

From signing people up to vote during her freshman year, to ensuring school board candidates heard students’ voices during this year’s Candidate Forums, Sharell is the definition of a leader -- she looks out for others before she looks out for herself.

“Education was always a ‘for me’ thing. But it’s not just about my education and if I succeed in life. It’s about all these other kids sitting next to me in class. All those people in other schools that I don’t even know about,” she said. “At United Way, we became more aware of other people. Of these big policies and the changes they are trying to do, and how they could possibly affect the future of not only myself but the people around me.”

“Failing students aren’t failures. They just fell and we didn’t catch them.”

She realized she didn’t understand the value of her studies and instead of putting the right time and effort in, she would scramble to finish her work.

Because of the opportunities she found through United Way’s Young Civic Leaders Program, she saw that she was in control of where her future was going and that she could actually make a difference.She also saw how unlucky other students were who weren’t able to take advantage of programs like YCLP -- fearing that most high school students may not find the support and inspiration she did.

“They hated the classes because they just didn’t get it,” Sharell said about many struggling students. “At some point, at some time, they have to catch up.”

Sharell continues to give her time to help her fellow students, working at the after-school Educate Program where she focuses on the art club portion of the program, all while completing her studies, building up her art portfolio, helping fundraise for school programs, and applying to colleges and scholarship programs.

Through it all, she feels more confident thanks to the public speaking and leadership skills she’s learned in the YCLP. Sharell encourages all students to consider joining the program and reassures shy students that you don’t have to be a big public speaker or super outgoing person.

Of course, all the hard work can wear you out at times, but Sharell says not to worry. YCLP has you covered on energizing both your mind AND body.

“It’s a place to be active, where you can be with people that think like you and want to make a change in the community,” she said. “Plus, they have good food!”

Know a high school student like Sharell that wants to make a difference? Recommend them for YCLP! Learn more here.